I’d stopped to gas up in the little Panhandle town of Paducah. Early December snowflakes, lighted by parking lot lamps, swirled and pitched against the night sky. In the bed of the pickup in front of mine, mesh bags of goose decoys were piled around a single dog box. 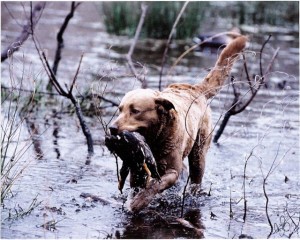 As I stepped up to pitch something into the trash barrel, I looked at the dog box and said, “Hey pup.” No response; not even a tail thump or curious sniff. I moved up for a closer look and laid my hand on the tailgate. A low growl told me the box didn’t hold a Lab. I eased closer and peered through the door grate. Light hit wide-set, whiskey eyes. A Chesapeake Bay retriever. That little portable kennel looked awfully insubstantial.

Just then the owner walked up. We exchanged hellos and talked geese, playas and dogs. He was a Chesapeake Bay retriever man heading for the High Plain, he said. And the aggravating two year-old anvil head in that box may or may not pick up your training dummy, but he’d haul in geese ducks all day long, and he’d make a reasonable bird out of the biggest, meanest honker that had ever been pissed-off by a load of pellets.

After a few minutes I caught myself leaning against the truck. I spoke to the dog again; he responded with a few sniffs. I had been approved by the boss. Still, I wouldn’t be sticking my fingers through his door grate.

The big Chessie came by his demeanor honestly. A century ago, his ancestors routinely retrieved 200 or more ducks a day from rough, cold seas, then spent their nights guarding their masters’ boats and equipment shacks. The Chesapeake Bay retriever is not a sporting dog but a working dog developed by nineteenth century Eastern Shore market hunters who had little time for formal training. Their retrievers learned on the job. Dogs that didn’t make the cut didn’t last long. No doubt many of the baymen loved and respected their retrievers, but brutal economics left no room for tolerance or sentiment. Sorry dogs didn’t propagate. Out of greed and ignorance, the market hunters slaughtered ducks and geese by the millions and beheld sights unfathomable to even the most jaded and well-traveled modern waterfowler. Those old killers are long gone, but they left behind something of themselves in their big, tough, workaday dogs.

According to the historical files of the American Chesapeake Club, the breed probably descended from a pair of Newfoundland pups, a male and female, rescued from a sinking brig bound for England from Newfoundland in 1807. The pups’ rescuer, George Law, bought them from the captain of the brig for a guinea apiece and named the male Sailor, and the female Canton. Law wrote, “They were most sagacious in every thing; particularly in all duties connected with duck-shooting.”

Sailor and Canton were bred to other outstanding waterfowl dogs; their progeny found favor among baymen and commercial hunters all along the Eastern Shore. Continued, no-nonsense breeding – pairing the best with the best – gave us the Chesapeake Bay Retriever.

If the Labrador is the sports car of the retriever world, the Chessie is the heavy-duty pickup. Males measure 23-26 inches at the shoulder and run 65-80 pounds; females weigh 55-70 pounds. The Chessie’s coat is short, dense, and  oily, with a thick wooly undercoat. The Chessie has no peer when it comes to breaking ice or working for hours in the coldest water. Color varies from chocolate to reddish brown to tan or “dead grass.” The uninitiated sometimes confuse dark Chessies with chocolate Labradors, but the Chessie’s  wavy coat and wide set, amber or whisky-colored eyes are giveaways.

Given their attributes and history, why are Chessies, so rare today? In short, because the modern hunter no longer heads afield with punt gun, sink boat, and eight gauge shotgun, intending to kill as many ducks and geese as he can carry to market. The traits that made the Chessie indispensable to the commercial hunter – indifference to pain, independence, the ability to improvise – make him harder to train. Then there’s the issue of temperament. Most modern hunters want a gentle, affectionate family dog, not a protector.

But protectiveness and territorialism shouldn’t be confused with aggressiveness or viciousness. “Chessies are very much one family dogs, and they’re very protective,” says Frank Blizzard, owner of Flying “B” Kennels in San Antonio. “They’re very territorial in the yard, and they don’t like strange dogs or people coming around. They’re not for everyone.” Yet Blizzard, who breeds several litters of Chessies every year, guarantees all of his dogs for proper temperament as well as sound hips and eyes. “I’ve owned Chesapeake Bay retrievers since 1966. We’re into our seventh generation of Chessies here, and I’ve never had a problem,” he says. Blizzard stresses that modern breeding has softened the Chesapeake’s temperament, while leaving the innate toughness and a useful degree of protectiveness. “These dogs form incredible bonds with children,” he says. “I always tell new owners that if they need to correct their kids, they might want to put their Chessie outside first.”

Of course breeding is only one term in the temperament equation. “One thing I emphasize with Chesapeakes is that you need to take them out to as many places as you can,” Blizzard says. “Let them play with as many people, kids, and dogs as possible.”

Within most hunting breeds, a broad gulf separates show dogs from field dogs. Not among Chesapeake Bay retrievers. Multiple titles are common. Blizzard’s Chessie Jack, a national and international champion in the show ring, holds an AKC Junior Hunter title and is working toward his certification as a therapy dog.

Yet many pro trainers shy away from the breed. “Chessies are not push-button dogs,” Blizzard says. “You’re not going to put an electronic collar on them and train them in a few weeks. But once a Chessie learns, he’ll never forget his training.”

It’s not surprising that some of the Chesapeake Bay retriever’s staunchest supporters are professional guides. Allen Morehouse, who owns Heart of Texas Guided Hunts, runs Flying “B” Chesapeakes in the flooded timber and fields around Hubbard. “Chessies are self-sufficient, spot-and-retrieve dogs,” he says. “Their marking abilities are just phenomenal. And they swim stronger than any other breed.”

Morehouse admires the independence that frustrates field-trialers and many trainers. “I don’t have time for a remote-control dog that you have to handle all the way to downed birds. If you’re my client, do you want me standing up handling my dog or do you want me down there calling, watching birds, and calling shots while my dog is out there doing his job? If we knock down four birds in a volley, the dog will mark three. I might have to handle him to the fourth bird.”

On blind retrieves, Morehouse simply lines his Chesapeake out to the general area of the fall, then yells, “dead!” After that, it’s up to the dog. “I turn my eyes back to the sky,” he says. “That bird is coming in.”

Morehouse sums up his feelings on the breed: “The Chesapeake Bay retriever is the true-to-god versatile working dog, and he’s barely even noticed anymore. Decades of market hunters lived and died and made a living by those dogs. That has to say something.”

To a few hard-core hunters, it says plenty.
CONTACTS